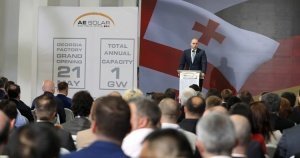 A new factory has opened in Georgia’s third largest city of Kutaisi to produce solar panels that will be exported to the European Union, United States and Middle East.

The factory was opened today by German company AE SOLAR, which is one of the world’s leaders in producing solar panels.

Georgian Prime Minister Mamuka Bakhtadze who attended the factory opening ceremony in Kutaisi thanked the investor for “choosing Georgia for implementing this project”.

Bakhtadze said that this was an important foreign direct investment for Georgia.

While attracting foreign direct investments, we should be oriented on high-tech production, that has export potential and help Georgia position itself as high-tech producing country”, said Bakhtadze.

He said that the factory will employ 300 people.

Bakhtadze also announced that “in coming weeks” the construction of a new factory that will produce electric cars will start in Kutaisi.