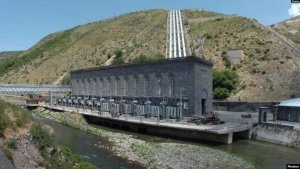 The deal announced late on Thursday leaves only one Kremlin-controlled company, Gazprom, owning major assets in the Armenian energy sector.

In a statement, RusHydro said a Tashir subsidiary paid 173 million rubles ($2.7 million) and assumed $55 million in debt owed by the Sevan-Hrazdan Cascade to buy the loss-making facility generating up to 10 percent of Armenia’s electricity. It said that the deal was approved by Armenian public utility regulators.

Tashir confirmed the signing of the deal and its financial terms in a separate press release. A photograph released by RusHydro showed that Karapetian was present at the signing ceremony in Moscow.

The Sevan-Hrazdan Cascade consists of seven hydroelectric plants built in Soviet times along the Hrazdan river flowing through central Armenia. The former Armenian government handed it over to Russia in 2003 in payment for the Metsamor nuclear plant’s massive debts to Russian nuclear fuel suppliers.

RusHydro acquired the hydroelectric complex from another state-run Russian firm in 2011. The energy giant, which operates most of Russia’s hydroelectric plants, reportedly decided to sell it four years later.

According to the Moscow daily “Kommersant,” continuing heavy losses incurred by RusHydro’s Armenian subsidiary were the main reason for its sale. The company posted a net loss of $13 million in 2018 alone.

Another Russian energy conglomerate, Inter RAO, pulled out of Armenia in 2015 for the same reason. It sold the country’s debt-ridden electricity distribution network and oldest thermal power plant to Karapetian’s Tashir. The new owner appears to have succeeded in significantly reducing the network’s losses.

Karapetian, 54, was born and raised in Armenia. He moved to Russia in the early 1990s, making a huge fortune there in the next two decades. His Tashir Group comprises over a hundred firms engaged in construction, manufacturing, retail trade and other services. With total assets estimated by the “Forbes” magazine at $3.7 billion, he is apparently the richest ethnic Armenian in the world.

The sale of the Sevan-Hrazdan Cascade means that Gazprom is now the sole state-owned Russian company having energy assets in Armenia. Those include the national gas distribution network and a major thermal power plant. Gazprom is also the country’s principal supplier of natural gas.

Foreign ownership in the Armenian energy sector has become more diverse in recent years. In 2015, Armenia’s largest hydroelectric complex, the Vorotan Hydropower Cascade, was purchased by a U.S. company in a $250 million deal hailed by the U.S. government. And in July this year, a German-Italian consortium officially launched the construction of a new thermal power plant in Yerevan that will cost around $250 million.